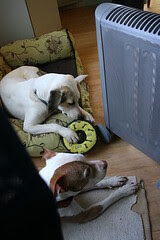 The presence of a foxtail in a dog's nose is obvious. It starts with the snuffles and turns into sneezing, eye squinting and oftentimes blood. The first time Mina was introduced to the new sanctuary property, she left with a $150 fox-tail up her nose.

So when my friend's dog started snuffling at work, I knew what it was. Because she is the animal care manager, finding time to drag her dog to work would be difficult (she would do it, of course), so I offered to take him. He is my 3rd favorite dog, after all.

When Wendal and I arrived at the veterinarian, I was asked to fill out the new client form. I filled in the information to the best of my abilities. When it came time to ascribe a breed, well, I couldn't. I wrote what I felt was the most accurate description of Wendal's breed: mixed. In the physical description section, I was more detailed - white dog, brown patch on right side of face, black nose.

Wendal is from Mexico, just like Celeste. He was a starving, mange-ridden street dog before being rescued. There is no telling what breeds created him.

But the veterinarian and staff were not pleased with my idea of breed. They wanted to call him something, even though there was nothing to call him. One woman was so adamant we put down a breed that she spent a good 3-5 minutes staring at Wendal.

She decided on Dalmatian mix. I decided to smile politely and nod my head. People who confuse Wendal for a Dalmatian should be handled with care.

Another vet on staff firmly believed Wendal was an Australian Shepherd mix but with a weird coat.

The experience reaffirmed my belief that veterinarians and their staff aren't any better at identifying breeds than the rest of us. While I'm okay with identifying Wendal as a mixed breed, it seems I'm in the minority. The same is true of Celeste. To me, she is a mexi-mutt, a mixie-mutt, a canine of dubious pedigree. Sure she has coloration found in certain breeds, and yeah she has some fancy blue eyes and a curly-over tail.

But she's not a German Shepherd mix or a Husky mix so much as she is just a mix. Don't get me wrong. I like to think about who her parents were and what they might be genetically. I'm not so different from everyone else. I'm just not so set on identifying her lineage such that I'd put a particular breed down on a sheet of paper. She's a 40 lb black, tan and white dog with blue eyes, prick ears, a curly black tail. She likes to grin submissively, clack her teeth in a friendly manner, growl at other dogs, and sidle up to people with great hopes of love.

I will grant you that that is far more difficult to say than she's a German Shepherd mix.

For you muttskie guardians, do you get annoyed with breed guesses, fascinated, have fun with it? Do you put down breed for certain documents or just leave it simple w/ "mixed"? 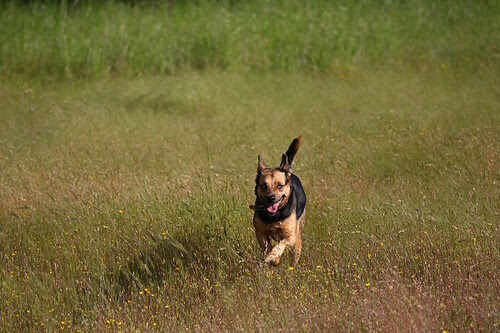