9/27/2012 - A traumatized, potentially sick German Shepherd was chased and eventually shot and killed by police. The dog's legal guardians were in the process of taking the oddly-acting canine to the veterinarian when, in the parking lot, the dog tried to bite his guardians and escaped. Police chased the dog, eventually cornering him in the woods where he was killed. Link

9/27/2012 - Police "legally" entered a backyard - without the owner's permission - looking for a suspect. A dog was in the yard and barked at officers. So they shot and killed the dog. Link

9/25/2012 - Omaha police investigating a burglary shot and killed two of three roaming dogs, who were not biting anyone but acting "menacing". Link

I watch her sleeping. She is very serious about it. Paws twitch, lip curls, ears pitch forward. Attempts to awaken her are met with third eyelid glares. You may not think this is possible, but it is. When it becomes obvious the human intends to keep her awake, she shifts, contorts, impossibly awkward...maybe the human will shut up.

When this position, neck twisted, fails to achieve the desired reaction (leave me alone, human), another is tried:

I laugh too loudly. She sneaks a peripheral glare, another grand achievement made by the grandliest of Pit Bulls.

I find her irresistible. She finds me painfully annoying. Literally.

On Neglect and Goats

Goats are great companion animals. They are good gardeners, unless you like your greenery to remain green and growing.

I am really saddened by the continued interest in using goats and sheep for weed abatement, an activity that sounds benign but hinges on starvation.

The goats in this picture lived on a 10-acre property with five others. Actually, it used to be nine, but the land owners never bothered locking the animals up at night, so four were killed by a mountain lion.

I could not bring myself to take a picture of the gutted home - I felt the echoes of her life all around me, strewn on the singed lawn, burned and smoking in a shell of a home.

This mother and her two babies were less than fifty feet from the house in a small enclosure, with no avenue of escape. She shielded her babies and thankfully only suffered minor singeing on her fur.

In the pasture behind the house, a neighbor watched as one of the male goats guided his family (four intact males and one intact female) to the corner of the property. When he did, he turned back to the fire and faced it head-on. She told me this story with a sense of amazement, never before had she considered other nonhumans capable of altruism. I was not surprised. I've seen farmed animals exhibit emotional bonds, friendships, jealousies, and a range of emotions we think unique to humans.

Dude's Surgery and the Sofa 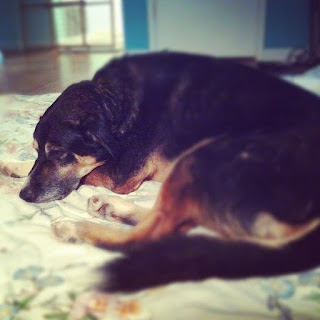 Dude survived the surgical removal of two lipomas, and now he is high on opioids.

Courtesy of my parents, Celeste is spending the next two weeks on vacation in Napa. I think she has a pretty sweet deal. My parents, the best. Celeste thinks so too.

This means Dude comes to work with Mina, which he finds pretty incredible. He loves people and people love him.

Downside is getting him to load up in the car, which he refused to do this morning. Shoving a 70+ lb dog up into an SUV is on my Don't Do That Again list.

To provide my high-on-pain-meds-foster-dog some comfort, Mina and I slept on the sofa last night. We may do it again tonight.

Sleeping on the sofa is never comfortable. It does not matter if you have a million dollar sofa. Sofas are for sitting and Sunday afternoon football games. They are not for achieving REM sleep. Unless you are Mina, of course, in which sharp rocks serve as fake-feather soft comforters.

Everybody loves Dude. How can you not? Here's a 7-yr-old dog whose sole pleasure in life is to place his head on your lap and sigh heavy and deep with pleasure. I am a fan.

Now I just need to find his biggest fan, the one who will give Dude the retirement he deserves.

9/18/2012 - A Georgian man is very upset after his 6-yr-old family pet Labrador Retriever was shot and killed by police. In a rush to see his grandchild born, the man tripped the alarm in his home. He forgot his password so he told the alarm company, he'd wait for police. Police entered his home WITHOUT permission from the back (the man was waiting at the front). The dog, justifiably, became upset and barked at officers. So they shot him. And he died. I hope the man uninstalls his alarm system.
LINK

9/17/2012 - Once again, witnesses and police see two different things. Witnesses see a police officer shoot a dog from a long distance, killing him. Police claim the dog was a crazed monster trying to bite everyone in sight.
LINK

9/11/2012 - A 8-yr-old Golden Retriever hit by a police cruiser was shot at 7 times (some hitting) in a residential neighborhood. He died. The officer and a witness have two very different stories of what occurred - the officer claims the dog - who, mind you, he had just hit with a car - was charging him (the dog was safe in his own yard at this point, so the officer could have knocked on the door) "in circles". So obviously he killed the dog. The witness claims the dog was not acting as aggressively as the officer claims. Doesn't matter, the chief of police totes defends his officer.
LINK

Dear Readers (if you don't want to read this, at least watch the video of Dude/Kade and Mina being cool),

There comes a time in one's fostering career in which you find a dog who is amazingly awesome. Not just regular awesome, but amazingly so.

Now is that time.

And Kade is his name. Actually, I call him Dude. It's catchier. You can elongate it, Duuude. You can call him Senor Dude. Duders. Dude-meister. Sir Dude. Mr. Dude. Many permutations. Also, I feel that Kade deserves a new name for a new start.

Kade was a guardian surrender, meaning his legal guardians dropped him and his 11-yr-old pack-mate/sister off at the shelter.

Now readers, I try to be a compassionate person. So, the story I have created for Kade and his sister is that his real guardian died and the family remaining (one child, no other relations) has a dog-aggressive monster-beast at home. It is hard for me to fathom any other reason for relinquishing 7-yr-old and 11-yr-old dogs.

Kadde's sister was euthanized. She suffered from an extreme load of heartworm that could not be treated.

So you can imagine that his first week with me wasn't easy, for anyone. Kade paced. He could have won a sad medal for extreme panting. He suffered from arthritis in his rear-end. He hated his crate and would cry at night and tear asunder his blankets and beds. He wanted to be outside more than inside.

I saw a grieving, confused animal trying to make sense of what must have been the most shocking of transitions.

And readers, Kade handled it as gracefully as one could ask of a middle-aged dog thrown into a crazy-new situation.

Now, two weeks later, Dude is a different dog. He feels stronger, because of the walks. His arthritis seems less bothersome. His idea of a walk is to meander in front of me and then whine when I stop to wait for him to cease the pulling. Toys are still a baffling concept to him, but he knows how to play with people and Mina-dogs.

Mainly, he just wants to lay down near me or Mina. He wants to be in my circle but not in a pushy, needy sort of way.

Our morning routine is as such - I sneak out of my room (Dude is loose at night and when I'm gone, cuz he's THAT damn awesome) to the glares of Mina and Celeste. Dude gets up, tail wagging, eyes soft, and howls. And then we walk to the glass sliding door, and he goes outside and turns to me, tail slowly arcing back and forth, and he howls again. Then he pees. This is an excellent tradition that I hope does not annoy too many neighbors.

Dude is a supreme being. He needs a home where he can relax, chill, take short strolls, howl at you and maybe fire engines, play with a girl-dog friend, and be able to snooze indoors or outdoors, wherever he sees fit.

I feel anyone who is willing to adopt a 7-yr-old dog is also willing to give Dude his Rimadyl and Cosequin daily, because you will obviously feed him twice a day and can just throw those bad boys into his food dish. Dude has a soft mouth and is gentle with treats. He knows sit and that's it. Sit is all he needs to know, people. He does not need to know fancy twirls or shakes or downs. I am teaching him stay, because that's kinda important. He knows come because he knows his name (which means come in his head).

Dude is an easy dog. HE WILL EASILY CRAM HIMSELF INTO YOUR HEART. That's a fact.