This is who you are supporting.

In this realm of opinion molding, Berman is a pioneer. He maintains one of the longest-running and most influential enterprises in the field. His attacks typically are carefully worded so that each sentence can be defended as narrowly accurate. But his critics say many are constructed in a way that distorts the overall picture, as in the case of the ad comparing Pacelle to Madoff.

Berman and other representatives of the center have, for example, regularly made media appearances to press the case of his corporate backers. Berman appeared on Fox News in April to castigate calls for increasing the minimum wage.

The Center for Consumer Freedom, for example, runs a highly trafficked website called “Obesity Myths,” which says that it is “myth” that “obesity will shorten life expectancy.” The website noted — correctly — that federal officials had lowered an estimate of premature deaths from obesity. But that revised report still said that many such deaths would occur, according to federal officials.

But Berman, in his role as president of a trade group called the American Beverage Institute, continues to battle Mothers Against Drunk Driving. The institute says on its website that its mission is to “expose and vigorously counter the campaigns of modern-day prohibitionists.”

The society, he said, doesn’t say it will give large amounts to independent pet shelters. Instead, Pacelle said that the Humane Society takes care of more than 100,000 animals at its own facilities, including a 1,300-animal care center near Dallas and a 1,200-acre wildlife rehabilitation center ranch near Fort Lauderdale.

And if the Alliance wouldn’t act — revoking the Humane Society’s accreditation — Berman repeated his written warning that he and his backers might go after them, too. “As I try to get to the goal line, worst case scenario is, in regard to the Better Business Bureau, if you’ll excuse the expression, become collateral damage,” Berman said, according to the transcript.

http://www.bostonglobe.com/news/politics/2013/05/18/corporations-anonymously-fund-attacks-and-influence-washington-policy-through-nonprofit-groups/qyaJIFcv7yYOsQvya6ykAK/story.html
Posted by Unknown at 1:37 PM No comments: 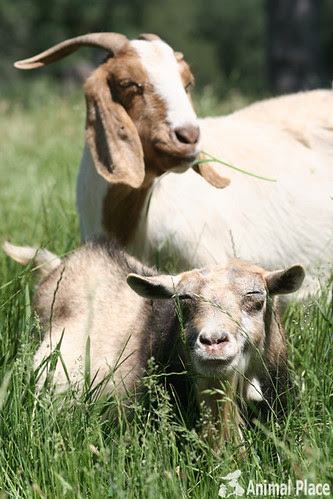 Smile. Charlene in front, smiling. Or squinting. Or avoiding an allergy attack. Laura in the back, eating grass. Goats.
Posted by Unknown at 7:41 PM No comments: 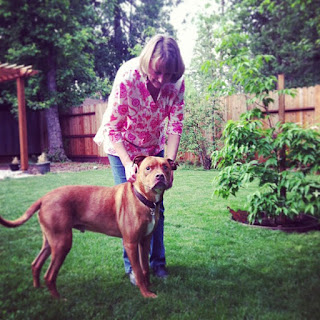 Here's my mom with foster dog Carter. (He's up for adoption!)

Don't let your dog not fight: A dog running away from police was shot and killed (after $17,000 attempt to save her life) after police were called to the scene of a dog fight in New York. Two dogs had gotten into a fight and the owner of one of the dogs was bitten while trying to separate the two. The third dog was not involved in the fight but was the one who was shot in the back, while trying to flee police after cops shot at the dogs at least five times. Officers than hid the still alive dog in the back of a vehicle without telling the guardians. They rushed her to the vet, spending $17,000 to try and save the dog's life. Unfortunately she died. Here's a petition. Police flat out lied.

Don't scratch anyone: A dog who ran at an officer was shot. The dog was running loose and scratched a child. When he ran at/near/in the vicinity of a police officer, the natural course of action was to shoot the dog. Link

Don't let your dogs fight and expect normal attempts at separating said dogs: Last year, a Champaign, Illinois police officer responded to the scene of a dog fight. The two dogs - a leashed Labrador Retriever and an unleashed dog described as a Pit Bull, were engaged in a fight. Both dogs would not stop fighting. Witnesses report that at no time did any human feel as if they were in danger from either dog. Despite this, the officer discharged his weapon shooting at the dogs seven times. He killed the Labrador Retriever, grazed the Pit Bulls, and embedded a bullet in an apartment complex. He was suspended for a day. Link

Don't steal food: Memphis police shot a mixed breed dog for essentially stealing a lunch. The dog had escaped from his backyard, stole someone's lunch, maybe nipped someone, and then was shot when he "charged" (read: ran towards/near/by/around) an officer. The dog was not instantly killed and instead dragged himself into his own backyard, dying from blood loss because apparently the officer didn't bother to think to take the dog to a vet. Police are investigating themselves so I'm sure it will turn out great. Link

Don't have a porch where your dog can emerge from: Winning the epic war against an ounce of marijuana, police arrested a dude, then shot his dog. Link

Don't expect police officers to hustle your mortally wounded dog off to the vet: The Humane Society of Grand Bahama is a little miffed with the way officers handled a dog they had shot. The dog, a Pit Bull, was shot in the head and remained alive when they were called. Authorities refused to permit HSGB staff to take the dog...finally, when the dog had a seizure, shelter staff essentially stole the dog to provide treatment. She did not make it. The officers were not charged with anything other than making a "bad" judgment call in not allowing medical treatment. Link

Posted by Unknown at 2:58 PM No comments:

Two Dudes Were Scared Of Mina And It Bummed Me Out

Sometimes I forget people freak out about dogs and Pit Bulls in particular.

I'm surrounded by people who think Mina is the shit. She gets extra special attention due to her cancer, and she thinks this is awesome.

When we have tours or classes or orientations at the sanctuary and I take Mina out to pee, people are ALL UP IN HER BUSINESS. They want to know why she is so adorable and how she got to be so small. They pet her head and scratch her butt. These people think the fact she totes around a squeaky toy like a pacifier is the cutest thing ever to occur.

So I get a big head about Mina. I think EVERYONE must like Mina. I used to be more of a realist, back in the day when I'd cry when someone would tell me "Watch out, she'll turn on you" or, worse, when I was told by someone in a ACE Hardware store that Mina should just die already. I used to be hyper-sensitive to people crossing the street to avoid my 35 lb dog.

Then I got over it and conned myself into believing that my colleagues, friends, and fellow vegans were the world. And then a couple of scaredy-cat dudes burst into my happy little bubble and ruined two minutes of my day.

Celeste, Mina, and I were exiting to go home. We were all so happy! Celeste was wagging her butt and failing to walk properly on the wood floor. Mina was just her normal kick-ass self, totally oblivious. And these two dudes entered the building and froze, deer in head-lights like. I asked if I could help them and they were speechless, staring wide-eyed at Mina.

Mina, by the way, is staring at the door, because she wants to leave and doesn't give a shit about these two dudes. And as Mina walked nonchalantly towards said door, one of the guys leaps three feet back. The other guy slips into the kitchen in a bid to avoid the 35-lb dog moving at a snail's pace to exit the building.

And while I'm writing about it, I'm not upset over it. Five years ago, I would have been. I would have declared to these two men that Mina is friendly and they should judge a dog by her behavior, not her breed. But now? I just don't care. If a couple of grown men are going to try and climb up a fireplace in the face of a petite Pit Bull ignoring them, whatever, I'll just write about it in my blog so I can laugh and move on.

Posted by Unknown at 9:11 PM No comments:

Mina Still Has Cancer And She Doesn't Give A Fuck

Mina has new lumps. They are probably cancer. Mina doesn't give a fuck.

Mina has a limp that keeps reoccurring more frequently than in the past. I try to lift her in and out of the car, up and off the bed. She huffs and puffs her annoyance, because Mina just doesn't give a fuck.

Mina gets even more tired than previously. Sometimes just sitting in my office causes her to start panting. While I try to cool her off, Mina continues not giving a fuck.

Mina sleeps more deeply and dreams of things that make her paws twitch. I wake her up and envelop her with a hug. She gives me a kiss, then falls back asleep...not giving a fuck.

I give a fuck, because that's my job as Mina's caregiver. I kind of wish Mina would care a little more, but that's her right. It is hard, just being with her and trying not to care. She isn't going to live another decade. She may not live the rest of the year. I'm not being melodramatic writing that, by the way. I'm just verbalizing what I am coming to terms with regarding Mina.

And here is Mina panting in the sun, smiling, with barely any teeth, 14.5-yrs-old and with a lot of not giving a fuck. I hope she inspires you. 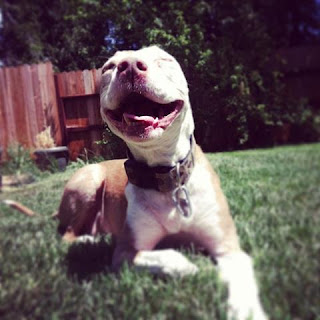 Posted by Unknown at 8:24 PM No comments: