Why Is Putting Your Compassion Into Action Condemned?

On Tuesday, a heavily pregnant cow was chased down by an SUV and shot 11 times, mainly in the side. The cow and her calf died. This wasn't a random act of violence but a coordinated effort to deal with a frightened cow. She was part of the California State Fair's live birth exhibits, in which heavily pregnant animals are transported from farms, confined and put on display. The cow escaped - the fair wasn't open, so the public wasn't in imminent danger. UC Davis veterinarians were on-site and after only 90 minutes of trying to corral the cow, their solution was to allow the state fair police harass, intimidate and then gun down a pregnant animal.

I know we live in an apathetic world. We complain on line, in person, on television. We opine that no one is doing anything. This is fine and can be quite cathartic. But when something strikes at your heart - whatever it may be - what on earth gives anyone else the right to tell you that doing something, standing up, acting out, is wrong? That's it's just a cow  or it's just an animal or do something better with your time.

And, of course, this is coming from people on their way to eat deep fried twinkies.

Okay, I should back up.

I work with and for farmed animals in a sanctuary setting. I'm familiar with cows and other large mammals. I've dealt with frightened animals, including 1,500 lb Holsteins. I've interned at dairy facilities and mucked out barns and spent hours snuggling - yes, seriously - 800 lb pigs. I've read books while curled up next to a 2,000 lb steer. I love farmed animals (it's why I don't eat them) and care deeply about what happens to them in this world.

When I heard about the shooting and saw the video, my heart ached. I thought of the skittish Holstein who lives at the sanctuary, a cow who if she were a dog would be on the same level as Mina. That is saying something. She's my "heart cow", as silly as that may sound to some. I love her dearly for being her.

I busted out letters to the editor and when another animal protection group planned a protest, I drove more than an hour and went. I stood outside of the state fair for an hour and a half on Tuesday and then another hour and a half on Wednesday. I went to the state fair board meeting yesterday and spoke on behalf of the sanctuary I work for and, of course, the cow and her calf who died.

While a lot of the people walking by to the state fair and driving by were sympathetic, there were enough "it's just an animal" comments that made me, well, they made me sad and disappointed. Here are these people who take time out of their day to attend a freaking fair, to stray amidst the masses under the hot sun, to ride rides and play games, yet they have the audacity to condemn people who stand up for what they believe in. They'll take the time to make a nasty comment but probably wouldn't do the same thing for an issue they believed in...if they did, man, we could get anything accomplished!

For me, "it" is...wait, "it" is not an "it" to begin with - SHE is not just an animal. She was an individual cow with intelligence and feelings. She had preferences and wants of her very own, all of which were ignored. She was pregnant and scared. And in her final moments, she was petrified, dying a painful, awful death. She damn well deserved a few people to stand up and speak out.

I do hold on to the quiet, thoughtful "thank you" from an employee of the fair. He was a young man and was present during the shooting. He described the horror of it, the outrageous level of response from the state fair police. It was something he would not soon forget, and he appreciated greatly that we were out there. He couldn't, but we could, and in that moment it was right.

Please do. Not just say, do. When there is something that hurts your heart or angers your soul, do. It can be simple - write a letter to the editor, blog about it and encourage others to do the same, write your council/commission members or legislative representatives. Contact the media, plan a protest, speak up.
Ignore the naysayers. If your passion is non humans, remember, they have no voice. They cannot write or protest. Their welfare is contingent upon our actions. They're not just animals, they are beautiful, wonderful additions to this world, and their needs and desires should be important to us all.

I leave you with this photo I took at one of the protests. This little girl helped draw these pictures. In her little way, she did more for this cow than those who were outraged but did nothing and certainly more than those who made snide remarks but do nothing for things they are passionate about. And it's just plain true - this pregnant cow was scared, and she deserved so much better. 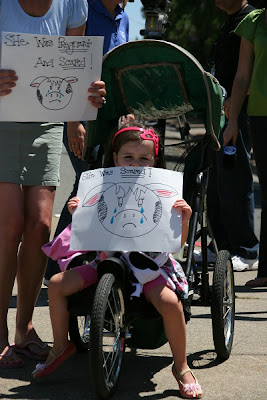