When I was a little girl, I had a very simple wish for my future self - to be an advocate for animals. At age 5, I decided I would become a veterinarian. Also, I was going to have 4 children by age 24. Kids, right?


I achieved my prime directive - I advocate for nonhumans every day.

But I realized veterinarians often must cater to the needs of humans, and that giving birth to a child when so many need homes did not mesh with my ethics.

I live with two permanent canines and usually a third temporary canine. 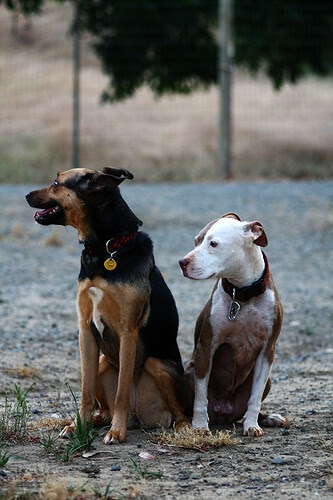 Mina was the first dog I adopted who I had to take care of on my own. I rescued her (she was 3) in 2001 from the shelter I volunteered at, the day they planned on killing her for being "too shy". She proved to be the most challenging canine I have ever known, and she has transformed how I look at dogs. Also, I believe she has changed many people's perceptions on Pit Bulls. She is a 35-lb spitfire of awesome.

Celeste hails from the streets of Mexico. I rescued her while participating in an amazing, life-changing, week-long spay/neuter camp in an extremely poor town in the state of Chihuahua in 2007. She was a 7-week-old puppy with big blue eyes and a Very Serious demeanor. Turns out she was lying and is actually a freak dog with great big ears and blue eyes. She loves Mina and is pretty adamant other dogs are all losers. She is a Germingo - a German Shepherd, Dingo Cross. Just kidding, I don't know what she's mixed with.

I help out every now and then fostering dogs for a local rescue.

I love photography with a passion and find many beautiful subjects at my job, education director at Animal Place, a non-profit sanctuary that rescues neglected and abused farmed animals and educates the public about animal farming and veganism.

I write about my experiences with the lady dogs, my fosters, work, photography, things that annoy me, and things that make me smile. Just like every other blogger out there, I suppose!

Disclaimer: The views on this blog belong to the author and do not necessarily reflect the beliefs and opinions of Animal Place sanctuary.