Wendal Versus the Frisbee

Posted by Unknown at 2:56 PM No comments: 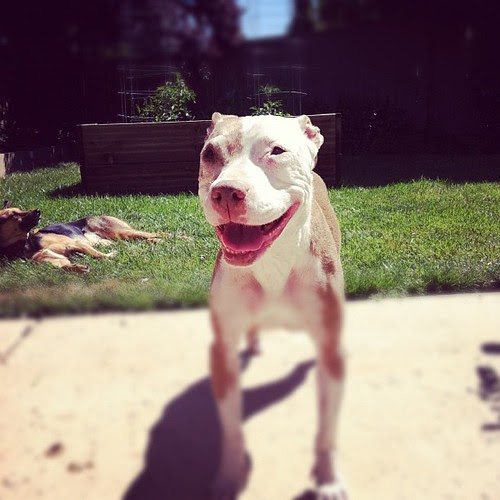 Mina is a smiling fiend. Some may claim she is panting here, but it is more than that.

Mina has been having her ups and downs lately, particularly with food. Some days she eats, some days she doesn't. I often use Celeste as encouragement to get Mina to eat, but that backfired when Mina forced herself to eat, then threw up. By the day's end, she was happy to eat but I feel guilty for trying to make her eat when she isn't in the mood.

Others see Mina and think she is young or middle-aged. I don't. Watching her, I see a brilliant spirit in the body of an old dog. She is active, but she is also fragile. I soak her food now, because it hurts her to eat. Before bed, I massage her back and legs, because she is sore. Every few weeks, she tweaks her left shoulder and spends the day limping. Her brown is turning white, and she tires easily. Her night vision is horrific, and she sometimes runs into random things during the day.

It's all so normal, mundane and natural. But I'm human, so it is so much more for me. Watching her age is watching her disappear and reappear, fade away while existing in a solid state. I hold onto every second with her in a painful embrace.

Dogs are kind of the best.
Posted by Unknown at 8:00 AM No comments:

Virunga: The Passion of Dian Fossey

My image of Dian Fossey was uninformed and incomplete. To me, she was a champion of a quickly disappearing species, the mountain gorilla. I held in her such high esteem that I almost had to put the book down when I learned she used to cripple and shoot cows, that she would kill the dogs of poachers, and like us all, she was a deeply flawed, complex human.

Her whole life was devoted to a small group of gorillas roaming the misty forests and mountains of Rwanda. Devotion is perhaps an understatement.

I am glad to have learned more of her flaws, her human foibles. I appreciate what she did to save those gorillas even more. How large of a burden it must have been to be the sole person standing in the way of an entire species' extinction. Some of her tactics I would never agree with, but I feel a small portion of the agony she must have experienced finding the gorillas she had come to love decapitated and dismembered on the forest floor.

When Dian Fossey was alive, there were less than 300 mountain gorillas alive. Without her, I think they would have all perished, victims of poaching, encroachment, zoo trade and accidental snaring. Really, I do. She forced people to see us in them.

Today, there are nearly 800 mountain gorillas. They are still endangered and still face the same threats they did thirty years ago, but they have a greater chance of recovering now.

The book itself is easy to read. It is engaging, although frustrating...good biographies always are when you learn the subject, you know, human. : )

Posted by Unknown at 8:00 AM No comments:

Email ThisBlogThis!Share to TwitterShare to FacebookShare to Pinterest
Labels: books

The River of No Return

In central Idaho is the largest wilderness area in the lower 48 states - Frank Church-River of No Return Wilderness. Some two million acres of pristine, perfect wild.

A young couple, one a biologist who used to trap, collar and track wolves, spend a year on their "honeymoon" in this naturally enriched place.

Their hopes are to capture footage of wolves while enduring what the native wildlife endure.

You can watch it for free, which is great.

My favorite part of the film is when an injured elk is seen limping slowly away from a pack of wolves. As dusk descends, it seems self-evident that this elk - seemingly alone in the world - will become a meal for the wolves.

But just as the wolves crest of the ridge, just as all hope seems lost, a friend appears. Another female elk positions herself between the wolves and the injured animal. Both survive the night, because one individual chose to be selfless in the face of an almighty apex predator, like the wolf.

Rarely are the animals seen as "prey" profiled or observed in as much detail as those labeled "predators". And I used to be okay with this. As a child, I loved documentaries about cheetahs and african wild dogs and hyenas. Wolves and leopards and lions. They all seemed so amazing.

My consciousness shifted when I stopped seeing "prey" animals as food. Soon it became difficult to watch the natural event of wolf chasing deer, cheetah loping gracefully after an equally lithe gazelle. I started to wonder about the behavior and intricate family lives of the wild buffalo and the powerful snow-colored rabbits.

Which is why I was not surprised to see one elk defending another. Compassion and friendship are not so unique. They are no less likely to be seen as selfishness and callous disregard.

I should make clear that I do not love the elk more than I love the wolf. I appreciate both and understand the complex environment in which they reside. The natural cycle of life and death, as painful as it is for me to observe, is not weighed down by my ethical concerns. It treks forth as it should, and I appreciate that.

I don't have any interest in becoming closer to nature the way this couple did, but I appreciate the harsh and unrelenting beauty they shared with the world.

If video does now show up, you can see it here.

Watch River of No Return on PBS. See more from Nature.
Posted by Unknown at 5:10 PM No comments:

I ate this shit. 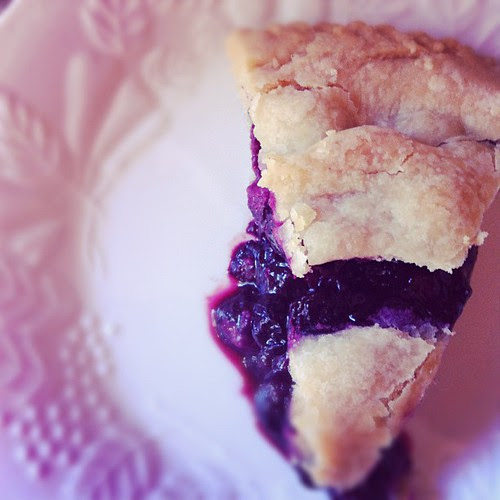 Posted by Unknown at 2:43 PM No comments:

Email ThisBlogThis!Share to TwitterShare to FacebookShare to Pinterest
Labels: veganism

I am a smoothie-making queen these days. 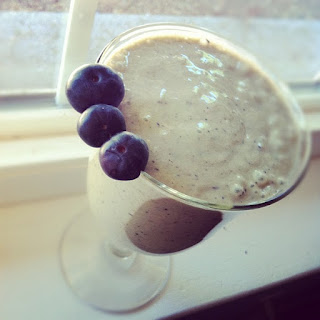 Would recommend reducing the almond butter and adding more sweet fruit.
Posted by Unknown at 3:28 PM No comments:

A small study in Barcelona discovered that all twelve dogs who exhibited "unprovoked" or seemingly spontaneous aggression were in pain. Eight of the dogs suffered painful hip dysplasia.

While this does not provide sufficient evidence, in my opinion, to make any meaningful claims about dog bites, I think it is a step in the right directions in terms of studying animal aggression. It would be great if more universities created FREE research clinics for guardians of aggressive dogs.

It should be noted that the dogs exhibited aggressive behaviors before the onset of pain. However, the pain seemed to reduce any warning signals that may have been present before the dog became painful. This makes sense - a dog in pain is not going to warn you the same way a dog not in pain would. So a dog will suddenly bite for seemingly unknown reasons.
Posted by Unknown at 6:40 PM No comments:

People, I love horses so much that I just drove 15 hours roundtrip to go visit some. Not just any "some", though, but very special rescued horses who live out their lives at Duchess Sanctuary in Oakland, Oregon. Duchess Sanctuary is one of the Humane Society of the United States' five animal centers.

It is home to 189 horses, most of whom are victims of the premarin industry, where mares are continually impregnated, shoved into small stalls 6-mos out of the year, and physically restrained to the point their muscles atrophy and many can become crippled. Their foals are raised and sold, often for slaughter. When they no longer produce foals, mares are sold for slaughter as well.

My heart adores draft horses. Big, beautiful, bold creatures. They are used heavily in the premarin industry because they produce more urine and are more docile. The particular herd I met was bred with paint horses which the farm (now out of business, yay) believed would increase the sales of the multi-colored foals.

Mina was my tag-team buddy for this trip while Celeste (hater of long car rides) stayed with my parents. 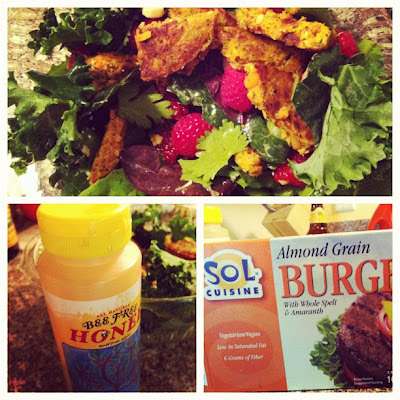 Salad is to summer as hot soup is to winter. When the weather gets warm, I can't wait to bust out the dark leafy greens (and smoothies). And now that I have full access to an incredible vegan micro-farm at the sanctuary where I work, I'm eating salads every day.

This salad I made is pretty awesome. I grabbed kale, dandelion greens, orach (a type of spinach), cilantro, and snap peas from the vegan farm. I added raspberries and blueberries. Then I cooked up some Sol Cuisine Almond Grain Burgers, chilled them in the fridge, chopped them up and plopped them on top.

If you are trying to remove animal products from your diet and really love honey, I highly recommend Bee-Free Honee. It is made from apples. I used to love honey. Bee-Free Honee tastes just like it, with a nice aftertaste of apple. Delicious.

And if you want to try non-meat burgers, Sol Cuisine's Almond Grain Burger is very tasty. It doesn't taste anything like animal flesh, but it has its own "meatiness" and definite tastiness that anyone with functioning taste buds should enjoy. Right now, I'm in love with their vegan falafals and tahini sauce. It costs $6.00 but serves enough for two, so it's only $3.00 per meal. I'm not saying that's uber-cheap, but it is pretty inexpensive, all things considered. 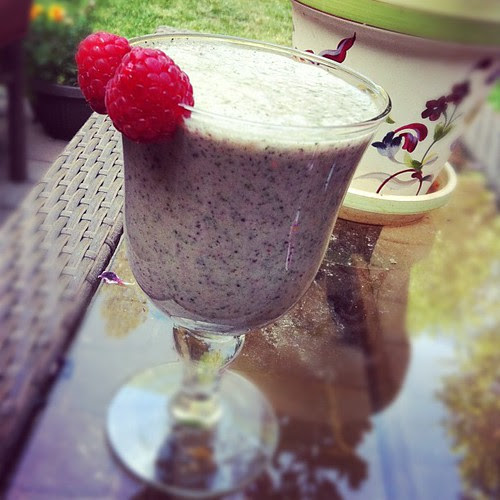 I just bought a DeLonghi immersion blender so I could eat healthier. I love smoothies but did not want a large blender taking up limited kitchen space. Plus, I just love immersion blenders.

So now I make a lot of smoothies!

This one was made with 2 kale leaves, a handful of blueberries, a handful of raspberries, half a banana, and 1/2 -3/4 cup of soy milk. It's easy to make smoothies really healthy and tasty. I like to add greens like spinach, kale, and dandelion greens because they are chock-full of good nutrients. And to offset the bitter taste, I add lots of fruit.

Immersion blenders don't do ice, so I make sure to freeze or refrigerate bananas or other fruit to add that extra coldness. Bananas make everything nice and thick too.

Posted by Unknown at 4:32 PM No comments: