Cows Are a Lighter Note

Let it be known that if I were to rank my all time-favorite species of animals, cows would be in the top five.

Most people think cows* are boring and without individual personalities. This is as far from truth as one can get. I learned this interning at a dairy farm. I watched in fascination as individuals made selections on who would be their best friends and who would not. It was obvious cows had preferences, could make conscious choices on who to groom and who to ignore.

Cows also hold grudges. While this was scientifically "discovered" in 2005, I've known it to be true for longer. At the farm, I fell in love with a Guernsey cow. She was a small cow with a brown and white patched coat. There were only two on this farm, along with eight Jerseys and more than a 150 Holsteins. I used to sneak her grain with molasses. Not a healthy food but she really loved it. If I forgot, I got the silent treatment. If I tried to give other cows a treat, I got the silent treatment and sometimes, she'd even pointedly walk up to me and turn her back. I learned my best "silent treatment" techniques from this cow.

While I was vegetarian at the time, I still drank milk. The farm was at an agricultural university and offered an okay life. Not great, by bovine standards, but not awful. I quite drinking milk the day I helped a mother become childless and a child motherless. I pulled a baby calf from a straining mother and watched, horrified, as he was carted away to be killed. She knew it was wrong and though she was weak from labor, she struggled to stand and bellowed. I will never forget that keening sound. It was grief and sorrow and pain and suffering. The baby cried back. That was the day I learned cows grieve and in profound ways.

At the sanctuary, there is a small herd of cattle - 8 in all. Three Holsteins, one Charolais, and four Jersey monsters. This morning, Nicholas was grooming Summer. They paused when I stopped by the fence. Summer lifted his head up over the bars and presented his neck. This behavior always makes me feel honored - it is trust embodied. Cows who have had good experiences with people tend to show it, more so than cows who have not. Summer grew up here. While his start in life was tough (he was a discarded male dairy calf shuffled to the auction yard), he could easily forget the cruel treatment he experienced early on.

I scratched his neck and waited for that moment when, as he always does, Summer would lift his nose to mine and breathe deeply. Friendship. These are the seconds I cherish. Although I am a transient member of the herd, a member I am nonetheless. I am greeted as if I never left.

Here's Freedom, one of the Jersey monsters at the sanctuary: 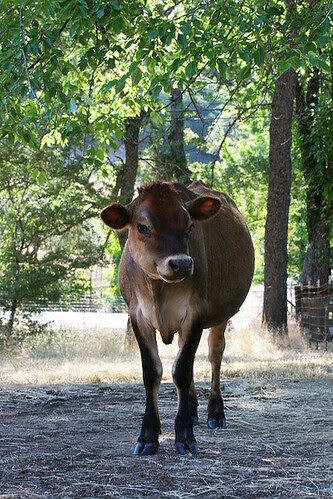 Elsa, a 15-yr-old Jersey monster who lived on a very small farm and, when she stopped producing babies, was going to be sent to slaughter. 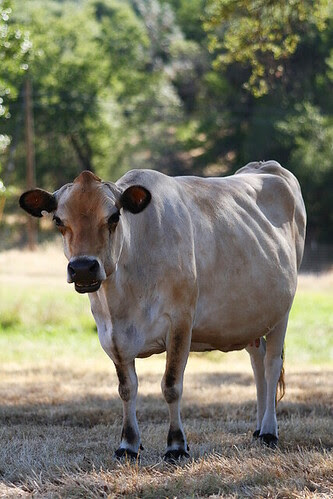 Sadie is a Holstein, a former dairy cow. She turned 12 in March. She is the best cow ever, I love her greatly. 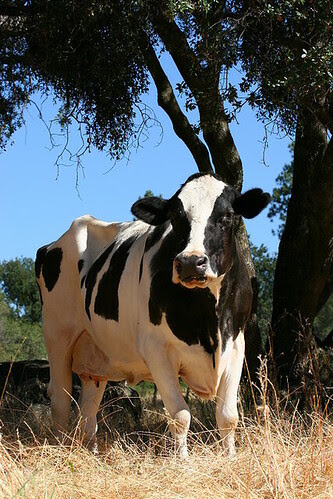 *I understand cows refer to the female of the species but is used colloquially in reference to both males and females. The root of "cattle" is "property" so I try and limit my use of the word. Please know I understand the correct terminology but am making a conscious, linguistic choice to abstain from the constant use of a word that, at its core, implies ownership (something I have ethical qualms with).
Posted by Unknown at 10:54 AM

I also use "cow" in the colloquial way. It's not like cow, steer, bull, heifer, etc are actual scientific terms, anyway. It's like the "is the tomato a vegetable or a fruit!?!" debate - 'vegetable' has no scientific meaning, so who cares? It's both!

I also like cows, though I've never really gotten to know one well. I've been enjoying Shreve Stockton's blog posts about her pet cows. They're endearing:
http://honeyrockdawn.com/category/daisy/

OMG! I remember Freedom's pic from when he was a small bedraggled calfboy! He certainly has grown up handsome.

I wish I would have had you with me the other night. You would have been able to counter so much better than I one of the women who pushed into my conversation with someone else. She grew up around cows, and her (recent) degree was in animal science, and she kept talking down to and over me and making claims that I knew were false but that I couldn't articulately, authoritatively refute without the formal sources and background myself. And this -- this idea that cows have friendships, feelings, personalities, desires, preferences, etc. -- was something she mocked as the most anthropomorphic thing she'd ever heard. I may have gotten somewhere there eventually, but there was another woman, unhinged and shrieking and combative, there too, and she was making it really difficult to engage calmly or follow the thread of conversation. Anyway, I spent a large part of this conversation thinking, "I wish Marji were here."

Oh I wish I could have been there just for moral support. I probably wouldn't have added much to the discussion - if folks cannot see the truth right in front of them, it's doubtful they're going to listen to any of us.

It might have surprised the woman to learn that the head dairyman at UC Davis (when I was a student) firmly believed cows had feelings and formed friendships. He believed they preferred different employees and made sure those employees worked hands on with the cows instead of the ones the cows were afraid of. And yet he could still send the cows to slaughter...it makes me very sad, in hindsight.