I fall more in love with Celeste each day. She has such a zest for life and exploring all opportunities.

Every day, if I cannot take her on a jog, I take her out to the 20-acre pasture in front of my office. She runs free, and I hope she never notices the feral cat lurking. Seriously, feral cat death wish much? And every single time, she comes over to check in and invariably does this: 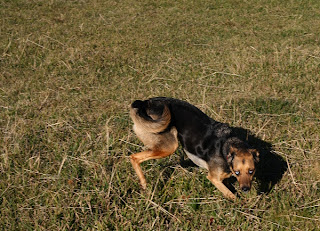 It's a Let's Play precursor to the infamous Play Bow, which I did not capture because my shadow was in the way. Celeste loves to play. She loves play-bowing. I will find her sometimes performing the behavior in the absence of any meaningful play-worthy item. She bows to Mina a lot, but Mina ignores her. Which gets her to try other techniques, like the Play-Bow Air Snap and the Play-Bow Nose Bop. If she REALLY wants to play, she'll play-bow air-snap and yip-bark. Mina always responds to this.

And sometimes, Celeste is sneaky about her intentions. She's incredibly smart and manipulative that way. Today at lunch, she really wanted to sit up on the sofa with me. Mina was, though, and Celeste didn't want to be up there with her. So she play-bowed. I thought she was being so cute, trying to engage Mina with play. She did the play-bow-air-snap-yip-bark. Mina responded, happily leaping off the sofa to play with her. The millisecond Mina's back paws touched floor, Celeste was on the sofa staring gleefully at me.

Admittedly, I told her to get the hell off, because no one plays Mina for a fool. Except Celeste. Mina did not care. She grabbed a toy, splayed out like a frog and wagged her tail happily. That is why I love Mina the most, though. She may be needy, sassy, picky...but she is painfully honest and is never insulted. Ever.

Celeste would be a good spinmaster. And not just because she spins in circles really well.

Dogs are the best.
Posted by Unknown at 4:53 PM