Why Should We Help Japan? Bill O'Reilly, Meet Your Foot

On a whim, born from boredom and an irksome throat cold, I paused on Fox News and the O'Reilly Factor.

He was discussing in his abrasive way why should we - as a government and as the public - help the people of Japan who are, in his words, a "first-world" country?

First, the idea of "first, second, and third world" countries is not just outdated, it's offensive. It stems from Cold-War nationalistic rhetoric that put America and its allies in the "first-world" category and our enemies, those scary commies, in the "second-world" category and everyone who didn't align themselves with us or them as "third-world". Better terms are more developed, developing, under-developed in terms of economic stability, literacy, morbidity, etc. ad naseum. It's a rub of mine, I know.

Second, nature does not care about how industrialized you are - it's a level playing field, in that regards. A natural disaster can dismantle infrastructure just as effectively in Haiti as it can in the coastal regions of Japan. We have seen the pictures, we know it is true.

O'Reilly is baffled why we would bother helping Japan because of how industrial and wealthy it is. Further, channeling selfish and self-righteous feelings, he asks - What has the world done for US in times of need? He claims that no one comes to OUR aid when disaster strikes. Because we are so rich, no one wants to help us, whine, whine, bitch, moan, whine.

He mentions specifically Hurricane Katrina and 9/11. Bill O'Reilly lacks google-fu. I have done it for him. I win.


After 9/11, several international search and rescue teams arrived to help find victims. Organizations helping the victims like The Children's Aid Society, received donations from overseas as well. While I could not find a long wikipedia entry, it would be silly of anyone to argue that we received no help from overseas private citizens or governments after the 9/11 attack.

After Hurricane Katrina, lots of countries offered aid. We were offered nearly a billion dollars in aid, of which we only used 5% - poor form! And scroll down to Japan. The Japanese people and their government donated or pledged to donate more than thirteen million dollars. Iran, which totally doesn't like us, offered humanitarian aid and crude oil (which I don't think we even accepted, gosh we are so stupid).We botched that entire disaster so majorly, I cannot even think about it without wanting to cry and rage at this country.

And even though we screwed up so much, the world was there to give us a helping hand. They gave because, like most of us, they saw their fellow humans suffering and they wanted to help. It did not matter that the United States is a wealthy nation. Perhaps, when they saw footage, they saw how awfully the government treated our people and couldn't help but donate! Or perhaps, like me, they saw the devastation, the destruction, the walking dead, stunned and afraid, and their heart ached.

Bill O'Reilly may not understand. For that, I am grateful he is not in charge of my tax dollars or my donations. I am glad he is not the chooser of what monies our country should give and what they should not. I am thankful he has no control over my pocketbook, no matter how stingy and scrooge-like he is with his.

For me it comes down to this image. I have not found a screen cap of it. But it is this. It is friends, family, neighbors struggling to get up a hill as a raging ocean trudges inland, carrying with it broken lives and homes. I can hear the ones video taping the incoming surge yelling, desperate with fear, to run! run faster! In that moment, with perhaps only a few seconds left to live, I could see people making choices - leave their friends and family behind, drop the leash of their dog, run ahead. But they don't. I watch, with the man behind the camera, as two pick up a grandmother or grandfather and run as fast as they can. I watch, with those who are seeing their world disappear, as a senior citizen holds tightly to the leash of her little white, dog. I watch with bated breath, with hope against hope - even knowing the video was taken days ago - that they all make it safe...realizing that several of them don't.

I am haunted by that image, of that struggle to survive, to help others survive. That video alone ensures I will donate (and I have), ensures that my breaking heart doesn't just splinter and wither, but that I do something, as minimal as it may be, as unnecessary as O'Reilly think it is, to help.

And I know that if something as disastrous and awful as Katrina strikes again in the United States that, unlike O'Reilly believes, the international community will help us. Even if we are wealthy, even if we *should* be able to properly handle the wreckage and aftermath, even if there is no Bill O'Reilly sanctioned reason TO donate...that people will. That people who don't even really like us, governments that wouldn't mind seeing us disappear, will still come to our aid. Because it is the just thing to do. It's that simple. These are the moments when we realize our universal humanity. I wish it held faster to us afterward.

I donated to Doctors Without Borders and the Search Dog Foundation (liberated half a dog from a county pound, yo).

When it comes down to it, I want to be like this dog (both of whom were apparently rescued). 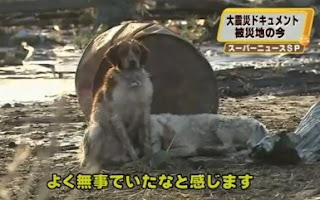