Does the UK not have something similar to the ADA? Or is it totally cool that a dog who provides life-saving services, like noticing when a woman might die, be evicted? Fail.

China going crazy with its one-dog policy. No dogs over a certain height are permitted, folks can only have one dog, and "large attack dogs" are prohibited, whatever that means. Good luck enforcing this one, folks!

Very sad story out of El Paso involving a kind, homeless man who ended up being killed by stray dogs. He had chosen to be homeless and whatever wealth he garnered, he often shared with others. How he lived his life inspired a fast-food restaurant employee to become a social worker.

Out in Evansville, when a little Poodle causes minor fender-benders and wants to be fed Pop-tarts, that's just what animal control does. And thus a little rag-a-muffing cutie-pie is saved from being hit by a car or shot by police for stopping traffic.

Illinois state representatives are channeling their stupid and proposing a law that would allow local communities to kill dogs and criminalize law-abiding citizens via breed specific legislation.

This article left me baffled by the title selection which includes the statement "attack nearly killed my pet" in which the "pet nearly killed" suffered scratches. Unless the offender was a cat and yeah watch out for cat scratch fever and shiz-nit - scratches does not qualify as "nearly fatal".

Another interesting story in which "Toddler attacked by dog" is the title in which a toddler was not "attacked" but accidentally walked in the middle of a dog fight and was scratched by the family's whippet. Being only two, the laceration to the face caused some physical damage and required surgery.

A really sad story out of the UK in which a Rottweiler named Roxy was stabbed to death in a valiant and successful bid at saving her young ward's life. The 13-yr-old guardian suffered one stab wound and is recovering in the hospital, but his family doesn't believe he is emotionally ready to handle the sad news that his best friend died. The knife attack is said to have occurred after the family's other dog got into a fight and the other dog's owner returned and attacked the child and Roxy.

Apparently eyewitness testimony ain't good enough anymore. You have to wait months to videotape the beatings of a defenseless dog before anyone will do anything. While I appreciate the positive spin on this story, I think it absolutely sucks it took months of torture for the dog and the human witnesses for anything to get done. That dog is lucky to have survived.

Oops, Philadelphia police raid the wrong house, piss off a dog and then kill the dog. Good job!

A Dingo at a childcare center in Australia attacked a child when the kid climbed up near the fence separating the wild dog from the kids and the Dingo leapt up and bit him. Two mixed breed dogs have been killed after they killed another dog in his backyard.

Breaking news, people, a 160-lb dog is not a Husky. In NWT, Canada, a little 4-yr-old boy barely survived a severe mauling by a "Husky mix" who weighed a 160-lbs. In other parts of the world, that would be called a Malamute mix. Or just a mix. Whatever. The dog was being cared for by the landlord where the boy lived. The child wandered near the doghouse whereupon the dog attacked him and dragged him BACK into the dog house. The babysitter caring for the child suffered bite wounds while she rescued the boy. The boy will require extensive reconstructive surgery and suffered multiple bite wounds all across his body.

A girl on vacation in India was bitten by a dog recently taken in by the friends the girl had just made. Great response by the parents to the kid's question of if she was going to die - don't be daft!. Love it. Anyways, child is okay and won't die, although unlike in the United States, rabies is an ACTUAL concern in India. As you can see, the puppy is also cute, but rude.

A St. Bernard in Canada responsible for biting a woman multiple times has been killed. The dog was on his property in an isolated area when a woman arrived to visit a friend. She was attacked after exiting the vehicle.

Skippy, the toddler-biting Golden Retriever has been given a reprieve and will go on to hopefully not bite other children!

Those Huskies and/or Malamutes and/or Husky-type dogs are going all rampage-y in Canada. Another Husky cross attacked a postal worker, sending the man to the hospital.

A Shepherd mix running loose bit a teenage boy and a police officer, and was shot and killed by the cop.

An unleashed dog described as a Doberman-German Shepherd cross killed another, smaller leashed dog in the UK. 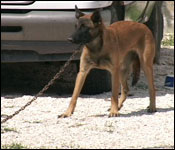 A dog described as a Boxer-German Shepherd cross was biting a 7-yr-old girl when a police officer driving by decided to intervene (good) with his gun (bad). The dog was not shot nor was the 7-yr-old girl standing nearby and no one was seriously harmed. In Belize, three dogs - look like Malinois - were "barking aggressively" and a police officer fired a warning shot into the ground. The bullet ricocheted and either struck a girl or caused shrapnel to strike the girl, causing minor wounds. The dogs have a long history of getting loose and acting aggressively.

A dog described as a Labrador Retriever bit a man in the eye. Ouch. But the big news was that he refused medical treatment.
Posted by Unknown at 6:00 AM

Email ThisBlogThis!Share to TwitterShare to FacebookShare to Pinterest
Labels: around the web, dog attack