In December of 2010, Hannah Saunders found a stray puppy and took him in. Now, by any reasonable standards, her efforts at saving the dog ended there and no one should have judged her poorly for turning the dog over to a shelter. After all, an animal shelter is supposed to be a safe haven in which displaced animals can be rehomed. But despite her apartment's strict no-dog policy Saunders took the dog to a vet, checked for a microchip, put up fliers and ads in craigslist, and called the shelters and rescues she could find. After weeks of no luck, she relinquished the stray dog to Indianapolis Animal Care and Control.

Saunders kept in touch with the shelter, offering to take the 8-mos-old puppy back if he was not adopted or about to be killed. She was told the dog had gone to a foster home and would be available in three months. Saunders was excited because she had found a home for Roger, the puppy, and arrived at the shelter to take him.

This story brings up a lot of issues from temperament tests to shelter response to negative publicity to what we expect of shelters and the public.

Problem solved, amirite? Am I being sarcastic? Yes. What bearing do testicles have on the discussion of Roger? Why would an invitation to volunteer be a solution to the problem of killing Roger? Hey, can I report Indianapolis Animal Care & Control's animal cruelty for killing a healthy, treatable pet? Or does that just apply to The Misinformed Masses?

Indianapolis Animal Care and Control "Aggression" Test
"As for their four-step aggression test, Rodriguez said the method is widely used and widely accepted across the nation, and that ACC employees are well trained before administering the tests."

Indianapolis Animal Care and Control uses the Assess-a-Pet temperament test. The shelter believes Roger's story is their chance to explain this widely used and sort-of-wildly (more like blindly) accepted pass/fail temperament test...TOTALLY distracting us from the fact they killed a perfectly  healthy dog less than a year old. Widely accepted does not mean good for the dogs. Training does not mean they are experts. 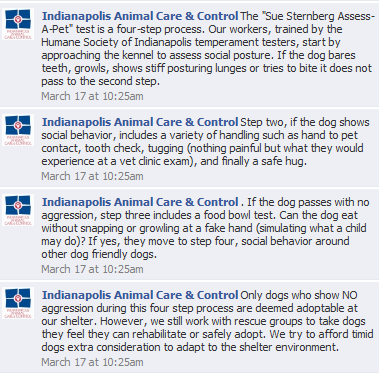 Read that. Read it thoroughly. Advice Time: Hey, Indianapolis Animal Care and Control - I got a way for you to increase adoptions immediately! STOP USING THIS TEST AS PASS OR DEATH.

Step One: See how dog acts in kennel. If he is stiff, growls, shows teeth, lunges or bites - death sentence.

There is so much wrong with this first step and its finality, I don't know where to start.
Step Two: Manhandle the dog.

I've seen the Assess-a-Pet temperament test in action. I've seen hundreds of dogs fail and get killed (exceptions include small dogs and socially acceptable breeds). It is, in my opinion, one of the most deeply flawed tests, because it is widely accepted as a pass/fail. I would find it less reprehensible if it was a scaling system that ended with a game plan for the dog in lieu of a death sentence.
Step Three: Expect the Unreasonable Around Food
Step Four: Dog Must Like Other Dogs
The Assess-A-Pet test makes it VERY easy to kill a dog. Very easy. I've seen too many dogs killed because of this test. It's the very test Mina failed (not for any signs of aggro behavior, but for her sensitivity). It is nothing to be proud of and, if it is true that IACC killed Roger because he bit a leash, then they have a severe problem with how they manage the "results" of this test. Biting a leash should never be a death sentence.

The Enabling and Misinformed Supporter Response

Last time I checked, an animal shelter employee gets paid to enforce the law and assist in the rehoming of animals. Hannah Saunders does not. The public does not. Large shelters have access to a larger array of resources. Hannah Saunders and the public does not. One part of animal control's JOB - as in what they were created to do - is to take in unwanted animals and theoretically find them permanent placement. It is not Hannah Saunders or the public's job to do so (it's why our tax dollars are paying them!) If we are animal lovers or feel it is just and right to help dogs and cats, then it is reasonable to be asked to participate through volunteering, donation, policy change, legislation, education, adoption, outreach, fostering, rescue, and the like. But if Hannah Saunders had been allergic to dogs but found it cruel to leave Roger abandoned, Indianapolis Animal Care and Control is supposed to be the safe haven she could have brought the dog to to either reunite the dog with his guardian or rehome the dog.

Killing a health, treatable pet is not an option.

Indianapolis Animal Care & Control screwed up. I want to see shelters own up to these mistakes and make it possible that they don't happen again. I hate seeing shelters blame the Hannah Saunders' of the world - people like you and me who go that small extra foot for a dog - for not only doing their job but doing it better by not just killing the dog when they found him. I hate seeing shelters act like a magician and redirect people's attention to testicles, cruelty calls, volunteering and the big, bad, stupid public. I hate seeing shelters defend a policy of "temperament testing" that sentences a leash-biting dog to death. And I absolutely loathe seeing people defend these shelters. Step up, admit you were wrong, and make it better for the animals.

People should WANT to bring unwanted animals to the shelter. People who find a stray puppy on the side of the road should have their shelter on speed dial, because they know it's a good place. A community that embraces the philosophy and principles of no-kill will ensure that its shelter system does too. We are a nation of dog lovers, and it's time for our shelter system to reflect that compassion and kindness.

Roger did not deserve to die. He is remembered by Hannah Saunders and others. I will remember him too. He is yet one more victim to die in the name of "widely accepted"; that is, a shelter system that facilitates the needless death of thousands of healthy, treatable dogs and cats and treats it as normal. Shelter workers are not my enemies, and I wholly respect those who are stuck in this vicious system, doing the best they can with what they have. But the system needs to change, the paradigm needs to shift. And it can be done - it is too late for Roger, but it needn't be too late for the thousands of other dogs entering Indianapolis Animal Care and Control. All they need to do is make a few changes. Lives saved will be the heart-pleasing result.
Posted by Unknown at 6:33 PM