Sharing Recipes and Being Vegan

I love to cook, but find everyday cooking difficult. About a month ago, I decided to make two recipes from my vegan/vegetarian cookbooks each week. I buy all the ingredients Monday (one of my day's off), usually prepare one recipe then and another mid-week. Since I'm cooking for one, most of these recipes last me several days...which means I get to enjoy cooking but not the frustration of trying to do it every day.

Plus I'm trying new things. I want to share what I make in the hopes you might consider trying some of these vegan recipes. So far I've made some interesting meals - pad thai (not so good, trying a new recipe this week), fajitas (yum), hummus and guac quesadillas (no cheese, surprisingly tasty) and cookies and cream cupcakes. This week, my two recipes are Ligurian Bread Salad and another Pad Thai recipe.

Liguria is a coastal region in Italy. The traditional ligurian bread salad has some fish element in it, from tuna roe to anchovies. Of course, this recipe from The Mediterranean Vegan Kitchen (one of my faves) contains only plant-based ingredients. I encourage you to check this cookbook out at a library or buy it online (it's only $12!) 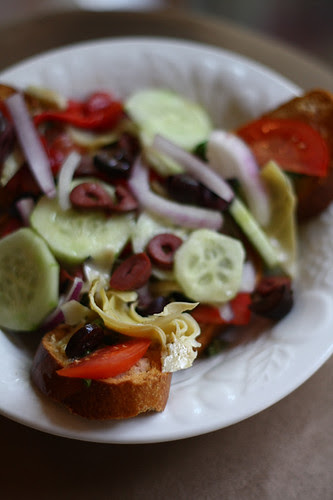 Directions
Pre-heat oven to 350 F. I cut up all my veggies while the oven was pre-heating. Arrange bread slices on ungreased cooking sheet and bake until toasted. Remove from oven and rub the top sides of the toasts with the halved garlic (or both sides if you're me!) Mix 1 tbsp of vinegar with 1 tbsp of water and drizzle evenly over toasted bread. Set aside.

To assemble, place three bread slices at the bottom of a salad bowl. Add a single layer of the tomatoes, oregano/basil mix, peas mix, cucumber, peppers, onion, artichoke, and kalamata olives. Drizzle a bit of the red wine vinegar and olive oil. Add another layer of bread and vegetable ingredients. Let sit 15-30 minutes to soak up all the flavors.

The recipe says to toss the salad, then serve. I ate it like one would bruschetta, not with a fork. It was very flavorful (letting it sit is important) with a little hit from the garlic and onion.

All the ingredients for this meal cost me about $20. I estimate this meal will last me four meals - two lunches and two dinners. I'm a light eater, so for those who want a heartier meal, you might want to pair it with another dish or eat more. So for me, this recipe cost me $5/ meal with a lot of leftover ingredients I can use in other dishes. I work for a non-profit, a job that is heart-rich, cash-poor...so I care about how much a meal costs me.
Posted by Unknown at 1:40 PM