Parrot, The Dog - A Picture Says it All

Please note: The shooting death of Parrot occurred in September of 2010. The police officer responsible was never prosecuted. 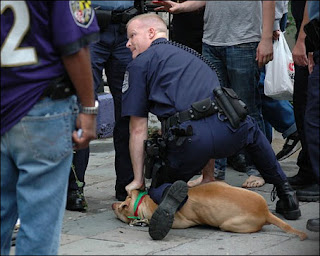 Pictures capture moments, seconds actually. They freeze time, keep it still for all eternity. Sometimes what they convey is true, sometimes photographs mask the big picture truth. But pictures, in their raw grittiness, never lie. They do not coddle or help you sleep at night.

This is a sliver of truth. This is a dog struggling the oppressive and painful subjugation by a human he doesn't know. This is a dog pinned to the concrete floor, scruffed by his neck, forced into an unnatural, uncomfortable position. This is a dog torn from his guardian who stands by, hand-up, perhaps pleading, perhaps just trying to encourage calmness.

I know this story would be different if the dog in question wasn't a muscular, short-haired, blocky-headed dog. I know that had this picture shown the shaggy-haired likeness of a Retriever, that the world would not hesitate to demand action, demand the officer be held accountable for brutalizing and abusing a restrained dog. They'd be appalled that the officer remains actively on-duty, out there in the world, armed with a gun, ready and willing to subdue dogs and then toss them down a flight of stairs when the mood strikes.

No matter, most people are rightfully outraged by what transpired.

They are, in my view, feeling that way because of this one photo. It speaks to them. It says that the dog is down, he is not a threat, that in that very moment, he was safe from harming others and safe from harm. At least that is how I feel. That is what the picture conveys.

With the collective wisdom of all those legs present, all those big men with their big guns, the best solution they could come up with is to fling a dog down a flight of stairs and shoot him? Wisdom clearly is not their strong suit.

The police report.
Posted by Unknown at 7:33 PM