Do it, you know you want to!

Professional Laboratory and Research was a normal laboratory that did normal experiments on normal dogs and cats. Experiments that involved normal flea products, for example, that you buy for your dogs and cats in the store or from your vet. One experimental treatment left cats vomiting, having seizures and bleeding from their noses...and it's a flea product that is sold in the store!

I don't use traditional flea products anyways, but I'm for sure not going to in the future. Not when that product is carried by hundreds of tortured, dead dogs and cats who deserved a whole lot better than humanity dosed out to them.

PETA went undercover. I don't give a flying monkey squirrel what you think of PETA. So don't be bashing them in the comments, because this is about the dogs and cats, not the PETA. You can see the video and violations here.

More than 100 dogs, cats and rabbits were killed to cut costs. Before they could be rescued, all the rabbits were killed. Around 200 dogs and cats, however, were lucky enough to find a fate better than the laboratory - the shelter!

The SPCA of Wake County took in 35 animals. One cat, an awesome looking one at that, has been adopted! The remaining 34 would like to sit in your lap now, please! Or ignore you. Or just stare balefully at you. Whatevs, they get to do whatever the hells they like now. 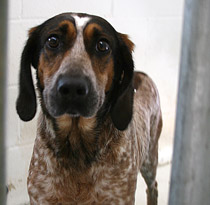 I like Marsha, personally, because she is Mina in coonhound form. Look at that face, it is so emo, I bet you're crying just looking at it! While I am concerned it might be because people were assholes to her, my gut feeling is she will look like that forever and ever, because she knows - DEEP DOWN - it is the look that is SUPPOSED to get her cookies and pats. Just because it didn't work for the past five years does not mean it won't work now. Point of fact, I just tried to shove five cookies into my computer screen. Damn you, Marsha! 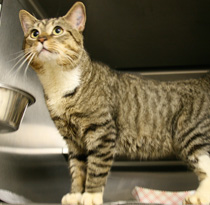 Now, I'm totally not a cat person. They claw you randomly and bite you and also don't care if you are happy or sad or mad or glad. They are in their own world and it is population CAT.

But Martin. He's handsome and round-faced, and I have a suspicion that he would love to curl up in my lap and meow feline words of affection. AND THEN CLAW ME. He is a cat, after all.

Triangle Beagle Rescue also took in dogs. BEAGLE DOGS. These are Snoopy dogs, why the hell are we testing anything on them? Crazy, I know. They're raising funds for the care of the doggies they took in, if you care to know. And you do. IF you can't adopt, give money. Wake County SPCA is raising money too, but they have a lot more than that little 'ol Beagle rescue.

Anyways, if you can't adopt one of these lab animals, adopt one from your local shelter and make up a harrowing tale for them.
Posted by Unknown at 5:20 PM