I'm used to the irate, the rude, the downright nasty comments I sometimes get on this blog, but a comment I read yesterday struck me as interesting. The comment was in response to a suggestion made that the dog pictured was not a Pit Bull but perhaps a Lab Mix.

I happen to think Parrot is a Pit Bull mix, but that's just me - a random internets person - making a guess. So is the person who suggested Lab Mix - she could be right, we could both be wrong (or right).

The response was interesting, though. Someone wrote that the dog couldn't possibly be a Lab mix because "Parrot has a a small dip in the middle of his cranium, a common trait in most pitbulls." 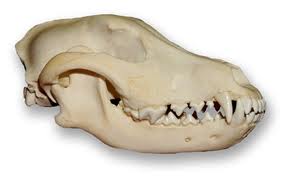 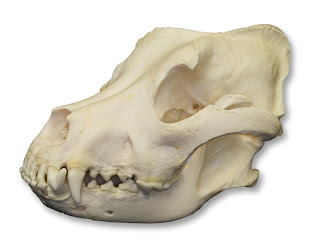 So far as I can tell, these skulls - one belonging to a Pit Bull, the other to a Labrador Retriever - both have dips in the middle of their cranium.In fact, all dogs do. That's just sort of the nature of skeletal development in the canine.

It highlights, though, all the strange ways we humans come up with to differentiate breeds within the same species of animal. We don't do this with cats, not really, but with dogs in the United States, it is almost sinful, dirty maybe, to call a dog a mixed breed.

If you don't know the parents or siblings or uncles, aunts and lineage of a dog, it's a bit silly to try and conjure up a genetic profile of a shelter dog or a dog with unknown parentage. It's even sillier to dismiss a guess on breed by stating it can't be that breed b/c of one of the most common, inherently canine traits in existence - a dip in the skull. Besides, all of that is moot - you don't always get what you expect when you buy or adopt a "purebred". It's much easier to just look at the dog, the sum of all his traits and quirks - that is his essence. It's not the dip in her skull or the number of wrinkles she has.
Posted by Unknown at 9:06 AM