Who is that dog? 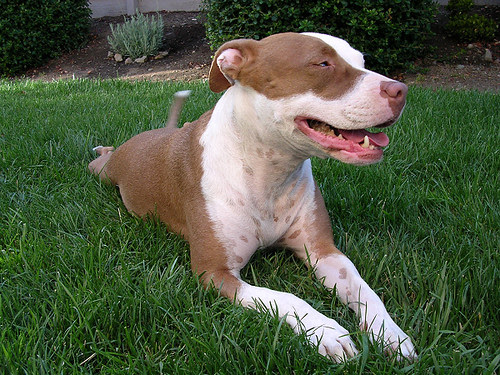 How strange it was to come across this photo from 2003 and not completely recognize the dog in it.

I knew the dog was Mina. The patchy-eye. The speckled chest. The wagging tail in the background. That ever present grin.

But the Mina I know now is so different than this Mina.

She is more gray, for one. She is smaller, for another. Skinnier. Can't keep on weight. Easier to physically handle.

She's also a little gentler. A lot slower. She is kinder and more sociable. The Mina of now is more appropriate around other dogs. She gets colder quicker - she now likes wearing jackets (yesteryear Mina tolerated it, for my sake).

While I sometimes wish for the Mina of yesteryear when the Mina of now gets tired on a mile-long walk, I love older Mina. A lot more than younger Mina. While her body diminished, her spirit grew larger. Truly, there is more of her to love now than eight years ago. 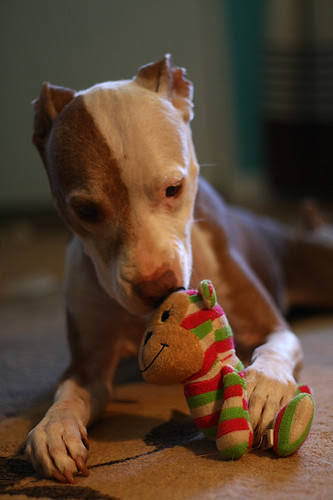 Look at her! How can you not want to cuddle and protect and love this small dog with her colorful monkey? Sure, the young Mina looked adorbs with a toy, but there is nothing so precious as an older Mina kissing and nibbling on Monkeybutt's head.

If I saw the Mina of yesteryear doing this, I'd get her riled up. I'd get her to play tug and frolic and generally be an energetic young dog.

The Mina of now? I just want to curl myself around her and protect her from everything bad in this world, including that vexing thing called time. I want to tug Monkeybutt away and toss him gently in the air for Mina to air pounce proudly.

Everything she does now is about 100 million times more precious, more perfect, more wondrous. That is the joy and heartache of watching a beloved dog age.