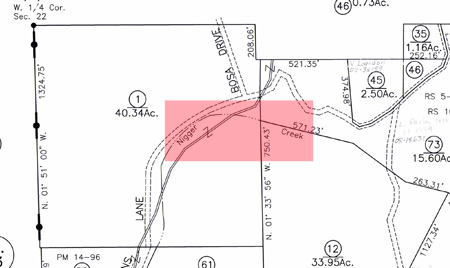 When Gail Smith bought a home in Rough and Ready, California, she discovered the creek running through her property was called Nigger Creek. She wrote a letter to the US Board of Geographic Names and requested it be changed to something more appropriate. She suggested Butterfly Creek for the numbers of butterflies.

Enter the Nevada County Board of Supervisors. They don't want to change the name. They feel it is not offensive (probably because they are white dudes, down with the patriarchy!) and that it is historically significant.

Their argument in support of retaining a racial slur as the name of a creek is a doozy.


“The name Negro Creek is therefore of historic importance as it is one of the few designations that allude to the importance of the Negro miners in the area. The current efforts of many to eliminate what are called derogatory names in this case would actually cause the efforts of these early miners to be deleted from the historical record of this area.”

Think of the black miners, people. They will essentially be erased from history if the name Nigger/Negro Creek is not retained. Alternatively, books - where lots of people get their history - could include the information on the importance/presence of African American miners in California's gold country. Of you can find the information on the internets.


White man supervisor states as if fact that if you are adverse to calling a creek Nigger/Negro, then you are in full support of wiping out all mentions of black miners in Nevada County. If this creek's offensive name is changed to something less so, then we will have erased all knowledge of black miners in California. I refer you back to the internets.


White man Supervisor said, "he was not in favor of a name change, unless a compelling case was made by the NAACP."

Seriously? He needs black people to make the case that calling a creek Nigger/Negro is offensive? Like what century is this guy from?

Well, here, ""If you are going to change that name, change it to something that black people living in your county today can take pride in, too," says Irma Jordan, the head of the Butte County NAACP, the closest chapter of the organization to Nevada County. She agreed that "Black Miners Creek," would be appropriate - a name that would both recognize the historic past and not offend anyone. She added that the use of "Negro" is offensive to her."


"Senator Curren D. Price, Jr., Chair of the California Legislative Black Caucus, believes that African American or Black would be a more appropriate term than Negro."

That's like what, two actual black people? Does the Board of Supervisors need a third?


As an aside, I'm about as embarrassed by the Board of Supervisors as I am by local reaction. Like, are these people for real? Is this 2011 or did I get shoved in a space-time continuum that honestly believes "Negro Creek" was really named after a "color"? I mean, these people could be my neighbors!