Everyone Needs a Hug 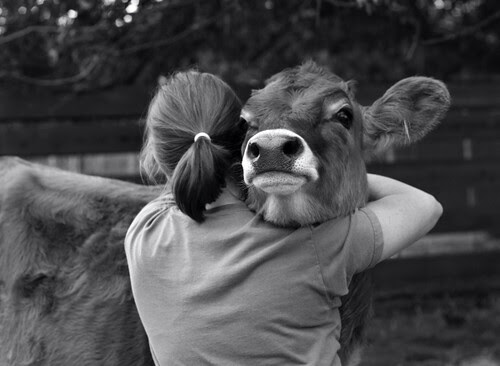 Douglas loves hugs. Sometimes he loves them so much he tries to mount the person hugging. This is to be discouraged, of course, but the moments of solidarity before is to be appreciated.

You can make Douglas happy in one of two ways: A) Hugging him; B) Drinking almond milk. If you cannot do A), do B)!!! Douglas is the dirty little secret of the dairy industry. All those cows gotta give birth so people can drink the breast milk of another species. Female calves replace their slaughtered mamas. Male calves don't produce milk and are sold at auction at 1-2 days of age for about $15/calf. They are killed for veal or "cheep dairy beef".

You can make kick ass stuff without dairy milk.

Like here are some orange cupcakes I made that didn't use any dairy or eggs or any of that nonsense. AND THEY WAS GOOD!

And chocolate chip cookies with a glass of soy milk made without dairy butter and stuff. They were the soft gooey choco chip cookies, warm out of the oven, and screaming to be dunked in milk or just crammed into your face!

Quesadilla without the dairy cheese...places like Raleys are offering lots of cheese alternatives, including the best for melting - Daiya! I just found out my local Raleys is selling the stuff and bought like five bags so they'd think it was super popular. I mean it WILL BE super popular, I'm just giving it a jumpstart!

So I'm just saying. If you want Douglas to give you hugs and try to mount you, then totally try the other white juice - soy, almond, coconut, whatever-nut.
Posted by Unknown at 8:00 AM

Email ThisBlogThis!Share to TwitterShare to FacebookShare to Pinterest
Labels: veganism