Pit Bull Saves Driver From Getting a Ticket

A well-deserved ticket, by the way.

In California, it is illegal to use a cell phone, unless you have a hands-free device. I had been waiting for a call regarding a possible euthanasia at the sanctuary. When that call came in, I ignored the law and took it.

Just as a CHP was driving by me.

Highway patrol officers like to approach from the passenger side, so as to avoid getting squished. I rolled down my window and announced that I had a dog. Two if you count the obnoxious, anxiety-ridden, panting beast in the very back. But since she wasn't sitting like a person in the front seat, I didn't mention her.

Mina sat up. A person? Score!

As the officer tried to chastise me, he had to contend with Mina and her tongue. Mina believes her tongue should be on you at all times. This is both endearing and gross. It also makes giving a lecture difficult. Nice doggie, the officer said.

Then he walked back to his car. After a second of pondering the meaning of life, he came back, gave me a stern warning and claimed that he wasn't giving me a ticket because of the rain.

I doubt it. It's because of her: 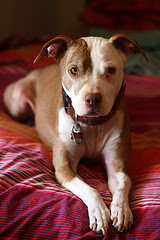 yay! you got the cop who likes dogs instead of the one who would order you out of the car and then shoot your dog when it gets out with you.

I'd like this story much more if it didn't involve your decision to put others at risk. I wish the officer had followed through and given you the ticket that even you admit you deserved. Next time pull over if you simply must take a call- I see nothing humorous about an accident waiting to happen.

Two Pitties in the City said...

I love this story! I've heard that the police have an affinity for pitbulls because they always see them in such terrible situations. We live by a police station and the officers are quite fond of our dogs. Maybe we should ride around with our pooches at all times...

Heck yeah it was because of her! The "rain"? psssh.


(Hope there wasn't a euthanasia at the sanctuary ??)

Another example that illustrates the wonder of pitbulls! Glad you had an animal-friendly officer. This story could have ended up a lot differently.

Another story about the wonder of pitbulls! Yay Mina!

So glad you had an animal-friendly officer, though. This could have had a much different ending.

They sell headsets you can plug into your phone that are not at all expensive. (I'm assuming that would count as a hands free device.)
I was thinking when I read this along the lines of what Emily said. How many times I've read similar stories with drastically different outcomes.

@YesBiscuit!: I have one, but I think I need to just have a "car specific" one. I keep losing the one I have.

@Michelle: No, the animal in question has decided to hold on for a bit longer, so we'll respect that until he can no longer thrive.