I Missed the First Snow

I grew up in the Bay Area which means the most snow I ever saw was the one time in college in which an 1/8th of an inch of the white stuff fell on the ground. We called it a Snow Day and didn't attend classes, that's how un-snow-like I am. I did go to Tahoe once when I was eight but we nearly plowed off a 5,000 ft cliff and I haven't been back since in the winter.

Now I live near the 3,000 ft level in the Sierra Foothills. It's not like we get a lot of snow, maybe a foot per year, but still that's a lot more than I'm used to.

This weekend, I was visiting my parents back down in the Bay Area.

And at home, the weekend storm dropped snow and tree branches in my yard.

For those of you living in colder climates, you don't get to make fun of me. At least not on my blog. ;) 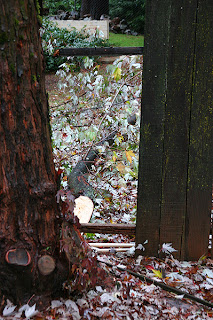 This 30' branch from the adjacent maple tree decided to take out a part of the fence and land in my neighbor's yard. In fact, every single one of my maple trees revolted and each shed a branch - three of the seven even made it into my yard, the rest in my neighbor's. And yes, I will be cleaning it up. 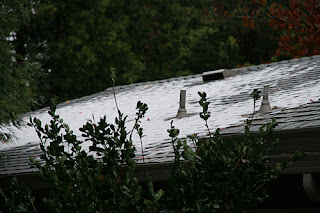 This is all the snow left from the storm, on my roof.

I'm kind of glad to have missed the storm - it knocked over my bird feeder that still hasn't attracted any birds and cracked it. Damn you storm.

Still, I would have liked to been there for the first snow of the season. There will be more, which I will complain about in an epic manner, you have been warned.
Posted by Unknown at 5:27 PM