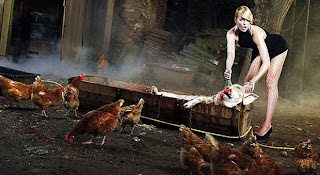 I'm looking over at a calendar we use to raise money for the sanctuary. For December, Gilbert the goat gazes back curiously at me. I find it more endearing than the above picture, which is allegedly the December month for a calendar that will - get this - be raising money for seeing eye dogs in the Czech Republic. You'd have to be a little on the creepy side to want to put that up in the office. There's a few other pictures from the December shoot here. In other months, you can see chickens being choked and lambs being killed.

The shoot occurred in the Czech Republic. According to the scantily clad model, the animals in question aren't real, they're just realistic models. Which begs the question, how does that make it okay?

There are many things wrong with this entire debacle.


Slaughter is not sexy and I think most people get that. It's dirty, gross, painful and involves the death of a sentient, feeling being. In no way should it ever be glorified as attractive, fun, or sexy. It's not. I am disheartened by the notion people might find this type of calendar pleasing, as I believe most people would find the actual slaughter of an animal to be disturbing and sad.

Raising money for one species off the suffering of another species isn't right. This is a contentious issue for me, personally. Animal shelters across the globe routinely rescue dogs, cats and even farmed animals yet serve pig, cow, chicken, and sheep at their sponsored events. This is an inconsistent ethic, and it's always bothered me. Still, I think the public generally finds it disturbing a calendar that depicts the gruesome deaths of animals while it raises funds for other animals. Maybe I'm wrong, but I can't imagine buying this calendar, plastering it on my corkboard and allaying others' concerns by letting them know the money went to help dogs. I don't think they'd jump for joy and enjoy the pictures.

As usual, the calendar perpetuates sexist views of women engaging in an activity that is generally perceived as masculine (right or wrong). The women depicted are stereotyped and objectified visions of "traditional" beauty - white, slender, generally blond. My guess is the other months depict women of similar body structure and physical appearance.

For some Czech animal rights activists, the calendar depicts Czechs in a negative or stereotyped light. I don't have any more information on that aspect, though.

There isn't much I can suggest we do - if I get more information on who to contact, I'll share. But really, I think this highlights the relationships, both awful and good, we have with nonhumans. Most people view dogs either in positive or neutral terms. They are companions, neighborhood visitors, consumers of our waste, and protectors. Certainly in the United States, we have a very positive association with dogs. On the other hand, pigs, who are smarter and equally social as dogs, are viewed much more negatively or, worse, not even given much thought. The same is true for most animals raised for food in the United States and, I would assume, the Czech Republic.

I can only hope the calendar will be pulled. There should be no room in any society for the display of such gratuitous violence glorified in sexual manners. None.
Posted by Unknown at 12:05 PM