The Year of the Scarf, Mina 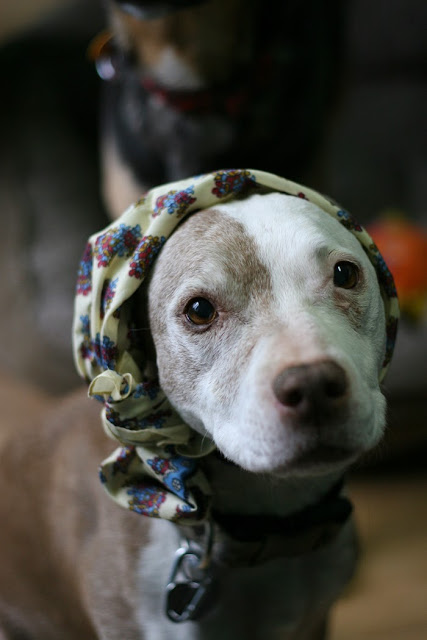 Everything with dignity. This is Mina's motto. Primarily because I inflict many indignities upon her. For example, The Year of the Scarf.

Some may think she looks grandmotherly in this photo. Untrue. Mina is ready for a convertible ride down to a beach where she may fling her front paws dangerously in salt water.

Senior Mina carries an air of dignity and cuteness with her at all times. A fine line to walk, for sure.

Junior Mina never did. She was a rolling, frothing, bowling mass of muscle and thoughtless intent. My dad likes to share a story of walking Mina at the local park years ago. She weighed 48 pounds. He had a black belt in karate. And she dragged him down a hill. I think there was another uncontrollable dog with a mirthful guardian. Nothing bad happened.

Another true story. Junior Mina had a hard head. Senior Mina has the same hard head but uses it appropriately. Junior Mina believed all creatures had heads like cement. She greeted me daily with a leap to my face, her rock-solid cranium crashing into my less rock-solid face. One bloody nose and black eye later, I devised a strategy.

Before leaving for college classes, I would steal with me one of Mina's favorite toys (she had more than one). This was not so traumatic for Mina, thankfully. Upon my return, I would offer the sacrificial squeaky toy in lieu of my face. Mina loved this game. Her favorite toy AND person showing up at the same time? Nice!

To this day, Mina greets my return home with a squeaky toy in mouth and a happy grin on her face.

Email ThisBlogThis!Share to TwitterShare to FacebookShare to Pinterest
Labels: mina, year of the scarf