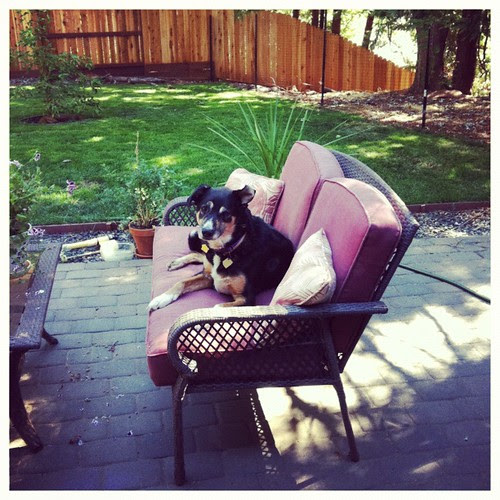 Big old Dude has moved on to his new home.

He is now living with a shy little cat and a lovely woman in Nevada.

More importantly, he is with someone who will allow him to adjust and grieve again (in a smaller way than he did with me) without deeming it burdensome.

A few weeks ago, another person applied to adopt Dude. It was not a bad home. In fact, by most standards, it was a darn fine home. Some fencing had to be fixed, but other than that, it was on an acre of land, with a person who would be home most of the time.

Still, after seeing the home and meeting more with the applicant, I never felt the same kind of joy and lightness I felt with other adopters interested in a dog I am fostering.

The rescue felt my feelings were sufficient reason to deny the adoption. I think another dog would be fine in this person's set-up, but my intuition guided me away from this home for Dude.

I grappled with my feelings. One person told me it was because I wanted to find a way to keep Dude. Untrue. There is absolutely no way I can have a third permanent dog with Celeste and Mina. 100% impossible. I think some have the impression that when I have a foster dog, all three dogs are lounging in the living room, playing in the yard, and coexisting beautifully.

In reality, baby gates separate the house. Crates keep foster dogs and house dogs safe. Only Mina can happily interact with interested foster dogs (and only Mina will put up with obnoxious puppies). Celeste is afraid and intolerant of other dogs. Mina cannot handle certain pack dynamics. And some of my foster dogs haven't even liked Mina (Kassie). It's not hugs and snuggles, folks.

So the denial wasn't because I wanted to keep Dude...I just wanted the absolute best for him. I wanted a home that would understand he was a sweet, soft-tempered dog who grieves fiercely and share loyalty and friendship with ease. That he howls and pants and sometimes paces. That he sometimes wants to be outside, snoozing on the porch rather than inside with people. That he is dog-selective and probably chases deer.

More importantly, I wanted a home where I would have NO doubt that he would - extreme circumstances excluded - live out the rest of his life. He lived seven years in one home. He saw and smelled and heard his pack-mate taken away, never to return. He took two weeks to finally want to be a part of my pack, his grief was so strong.

I think he has found that in his new home. I did not cry, although my heart hurt. It felt right.

So here's to Dude, the best old-man foster dog ever. Happy sleeping!