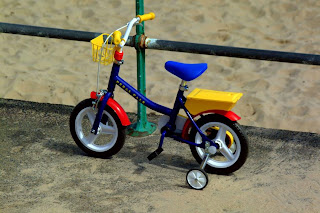 In Buckner, Missouri, pit bulls are banned. A couple with two pit bull mixes interested in moving into the area would like the ban repealed or, at the very least, an exception made.

Let's all gasp in horror at the incident leading to the expulsion of all Buckner pit bulls - a puppy described as a pit bull bit a tricycle. Yes, there was a kid on the three-wheeled device but come on! No one was hurt, the dog could have been more interested in the rubber tires of the bike and it wasn't as if all pit bulls in a 5-mile radius were eating children left and right.

Oh yes, Buckner is the same town where a Bull Mastiff severely mauled two people in September of 2007. Bull mastiffs have not been banned (nor should they, of course).

Fascinating logic out of Buckner!
Posted by Unknown at 9:21 PM

I couldn't agree more with the comment you made. I am the husband of the couple the Examiner spoke of and am fighting this with much determination. You seem as if you have your facts straight in an intelligent and well written comment. If you would like to show up to support us Thursday, August 28th, at 7 pm in Buckner, you can call me for directions. 816-267-6668 or email at ogpanther2004@aim.com I am looking forward to a response and am inviting members all area pit bull rescues and groups. Thanks, Casey Embree

I wish I could show up and help out, but I'm way out here in California!

My thoughts are with you, and if you think polite letters to the council would be of assistance, I'm more than happy to oblige.

I did not know that. That is really a Pitty-full thing to hear. No worries though, I will have plenty of support coming and I think a victory here in a small town of 2,700 people might help to open the eyes and kind've clear a path to what APBT owners and admirers are trying to achieve. A victory here may lead to some bigger cities complying as well. Thank you, Casey PS- I made a mistake, the meeting is actually Sept. 4th at & PM for those who would like to come.