The Fundamental Problem With This Story 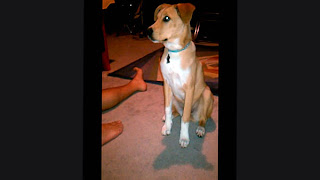 This is Diva. Before you go all, OH MY GOSH SHE IS CUTE, she is dead. No one will ever get to see those totes adorbs socks or rub those clearly velvet soft ears.

Here's what happened. A year ago, Diva was adopted from the Balch Springs Animal Control animal shelter. ADOPTED! Someone was all, "Diva, you are awesome and I want you in my life!" and adopted her! This is what animal shelters want, dogs to be adopted into homes.

Now, as we all know, crap happens. Mistakes happen. And if you think you are magically exempt from the errors of life, then you have not actually lived much. Even great, wonderful people screw up royally.

Diva got out of her yard. She wanted to roam the streets a little, see what was on the other side of the fence.

Lo and behold, she was met by Balch Springs Animal Control officers. They brought her to the shelter.

Her guardian was frantic, as any good guardian would be. He called the shelter repeatedly. He hoped that Diva's id tag would lead him to her. Apparently an officer tried to call the number on the tag but dialed it wrong or was stupid or something because it didn't go through properly. (Balch Springs, train your officers how to dial a phone number, yo). So after putting in that monumental effort, this animal control officer just didn't pursue the matter.

Diva was senselessly killed after only a week.

On the day she was killed, her guardian called the shelter yet again, hoping to find his dog. He was subsequently lied to and told the dog was not present, even though the officer knew the dog was there but was now dead.

Now that animal control officer has been put on leave. Problem solved in the city's eyes. Heck, they went "so far"as to offer the grief stricken family a new dog from the shelter, free of charge. Well, gee, Diva was clearly a totally replaceable member of the family and hells yeah, just toss me a free dog and I'm set!


The shelter has offered him another dog at no cost, but the Balch Springs man says that only shows the city continues to not understand the problem.
"A dog is part of the family; it is not just property, and that's the way they're looking at it," McGowan said.

Here's the fundamental problem: Diva should never have been killed by her rescuers. Period.

No amount of backtracking, no amount of "free dogs your way", no putting an animal control officer on leave is going to change the fact that there was zero reason for a healthy Diva to be killed. Heck, it might even be expected that the extra mile would have been taken for this little lady, since she was originally from the shelter!

We've got a problem, people, and it isn't the likes of Diva's guardians. She had a tag. There was a phone number to call. They had done their due diligence - they adopted a dog and loved her dearly. And their unfortunate error or life's unfortunate error should not end in the needless death of an adoptable animal.

Email ThisBlogThis!Share to TwitterShare to FacebookShare to Pinterest
Labels: animal shelters, no kill