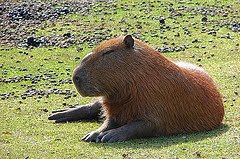 Do you think Mina and Celeste would kill me if I stole a capybara from Venezuela? Probably not, but I'd likely have a problem with customs. Well, Celeste might kill me. And the capybara.

I have dreams of having a capybara because they would make the perfect vegan companion animal. Which gets me into trouble with hard-core animal rights activists who are all NO COMPANION ANIMAL FOR YOU. But how can you look at that picture of the lounging capybara and not want to see that awesome animal outside your kitchen window? You cannot.

Capybaras are snuggable and hefty - 100 lbs. They are the world's largest rodent and are hard-core. They are biddable and trainable. They adore swimming like woah, which I can forgive them for. They chatter like a guinea pig, which I find quite endearing. AND THEY ARE VEGAN.

My dogs may like broccoli with hummus but they do not like like broccoli with hummus. They are more  meat and potatoes, minus the potatoes, sort of ladies. Which makes my choice of veganism all the more difficult and frustrating - I choose to select who is more important, Mina or the nameless lamb. And I pick Mina. Talk about wishy-washy ethics, I know. If I was a good vegan, I wouldn't have omnivorous/carnivorous mammals as companions. But I've had rabbits and guinea pigs and you cannot take them on walks like a dog, or let them off leash, or snuggle them like a 40 lb dog. I love rabbits, but they are not as engaging as dogs for me. Guinea pigs are awesome and I adored the two I had for four years in college, which is why an oversized guinea pig, aka capybara, would be so fantabulous. 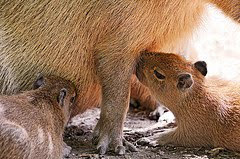 If I ever go to Venzuela, I will have to remember not to go during Lent. I have no desire to be the crazy American who cries bloody murder when people start killing these adorable, loveable animals and eating them. Unbeknownst to you and me, capybaras are actually fish because they are semi-aquatic and thus are acceptable to eat during the Catholic observation of Lent. Oh, those silly Catholics (much love to you Catholics, your educational system helped me get my learn on before college).

In conclusion: It would be awesome to have a capybara snuggling with Mina and getting glared at by Celeste.
Posted by Unknown at 12:56 PM

Capybaras make me feel smart. Why you ask? Well, I had to do a report once on hispantic fauna, and one of the animals I chose was the Capybara, so I learned a lot about it. Then one night a few months later my friends and I were watching Discovery channel and Capybaras came on the tv. All my friends said "What the h*ll is that?!" I muttered off a few facts seconds before the guy on tv said exactly what I did word for word. Everyone looked at me funny...lol

It's just a pig guinea pig that likes the water.

However, you may also want to stay out of the Andes, because well, um, have you heard of cuy?

A cuy festival is held in Huacho, Peru, where they dress the cavies up in little costumes and have a parade. Thenthey have a big cuy dinner: http://news.sky.com/skynews/Home/Strange-News/Guinea-Pig-Festival-In-Huacho-Peru-Rodents-Dressed-Up-For-Fashion-Show/Article/200807315047608

Perhaps that is why Mina hates when I dress her up - she thinks I might eat her afterwards. :)

Guinea Pigs are awesome. I had them as a kid. Now it's Pit Bulls! Good post!